It was a busy start for Ohio Farm Bureau on Day 3 of American Farm Bureau’s Annual Convention and Trade Show. OFBF President Frank Burkett made an appearance on This Week in Agribusiness with Max Armstrong and RFD-TV with Tammy Arender to talk about trade and his recent visit to The White House.

Ohio Farm Bureau’s Vice President of Public Policy Yvonne Lesicko and State Trustee Rose Hartschuh were part of a panel discussion to inform attendees about the implications of “Rights of Nature” laws on agriculture and Ohio’s fight against the Lake Erie Bill of Rights passed by Toledo voters last year.

Today was the final day that county Farm Bureaus were able to showcase their AFBF award-winning events on the Trade Show floor. There was a lot of talk around convention this week about how Ohio had eight of the 24 exhibits featured this week. Congratulations to them all for their hard and noble work for their local communities.

The Closing Session on Monday was capped off by keynote speaker, Secretary of Agriculture Sonny Perdue. Secretary Perdue applauded AFBF members on their hard work to have the overreaching Waters of the U.S. (WOTUS) rule repealed and thanked them for their patience as the new trade deals with China and Mexico and Canada were being worked out. He sees great promise for the future of American agriculture and knows that even with the challenges of 2019, farmers are eager to get started with a new crop this spring.

Day 2 began with the heartbreaking news that Bonnie Duvall, wife of American Farm Bureau Federation President Zippy Duvall, lost her battle with ovarian cancer on Saturday. Our prayers go out to the Duvall family. During the General Session, Duvall shared his appreciation, via a pre-recorded video, for the support from across the country and asked that the convention continue as a celebration of the organization’s achievements, as Bonnie would have it no other way.

Here is the full video of the opening General Session. 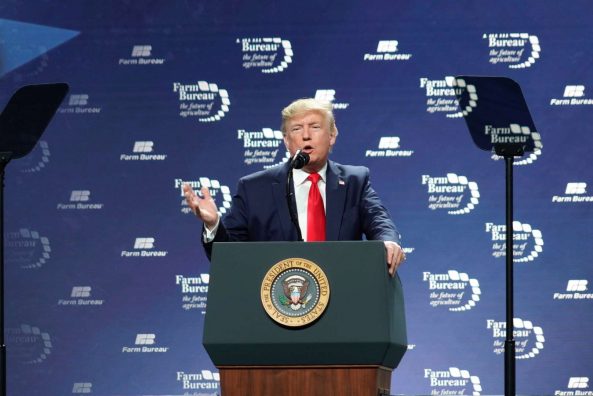 For the third consecutive year, President Donald Trump addressed members of the American Farm Bureau Federation. His appearance follows a week that included a Phase 1 Trade Deal with China and the Senate’s passage of the U.S.-Mexico-Canada Trade Agreement.

Victoria Popp made a strong showing in the Sweet 16 round of American Farm Bureau’s Discussion Meet on Sunday. Competitors tackled this question:

How can Farm Bureau build upon collaborative relationships such as Farm Town Strong to combat nationwide crises such as opioid dependence/addiction and mental health issue?

Victoria is a great representative for the Buckeye State and Ohio Farm Bureau is proud of her efforts and congratulates her for a job well done.

Ohio’s Kyle and Ashton Walls made the Top 10 in AFBF’s Excellence in Agriculture competition. On Monday, the Final Four competitors will be announced.

The first two rounds of the 2020 American Farm Bureau Discussion Meet included Ohio’s Victoria Popp from Clermont County. Popp and fellow competitors shared their thoughts and ideas about topics including:

Cell-based food products have demonstrated that the food system is rapidly changing. How can future technologies and related products be beneficially integrated into modern agricultural production without hampering the success of traditional products and the farmers and ranchers who grow them?

The 21st-century agricultural economy is threatened by labor shortages. Without a clear solution accessing foreign guest workers as a component of immigration reform coming from Congress, what are some creative and legal ways for agriculture to address the labor needs of a modern production system?

Victoria is moving on to the Discussion Meet Sweet 16 Sunday morning.

Kyle and Ashton Walls traveled to Austin, Texas from Mt. Vernon, Ohio to compete in the American Farm Bureau Excellence in Agriculture Award. The Walls are first generation farmers and talked about the importance of being involved with Farm Bureau on the country, state and national levels. Between cattle, chickens and off-farm careers, not to mention their young daughter, life is pretty busy for The Walls these days. Their passion for their farm and the agriculture industry drives them to become better representatives for Ohio Farm Bureau and agriculture as a whole. The will find out if they make the Top 10 on Sunday!

Paul Dorrance, a farmer from Ross County and Ohio Farm Bureau Member, was invited to Austin by AFBF to speak at a session about the benefits of animal movement through rotational grazing. Many farmers from around the country took part to find out what they can implement on their farms and ranches to maximize production and help the bottom line.

Ohio Farm Bureau’s Vice President of Public Policy, Yvonne Lesicko, was asked to join in for the FarmHer Podcast: Shining Bright with Marji Guyler-Alaniz. The podcast shines a light on women making the ordinary extraordinary in the agriculture industry.

More than 200 Ohio Farm Bureau members and staff will travel to Austin, Texas Jan. 17-22 to celebrate this past year’s achievements and represent Ohio member interests as Farm Bureau policy priorities are set for the coming year at the American Farm Bureau 101st Annual Convention.

Eight Ohio county Farm Bureau projects were chosen to participate in the County Activities of Excellence program, and young agricultural professionals Kyle and Ashton Walls, Matt Vodraska and Victoria Popp and will be competing in the national Excellence in Agriculture, Outstanding Young Farmer and Discussion Meet contests, respectively.

Ohio Farm Bureau partner, Nationwide, is a sponsor of this event.